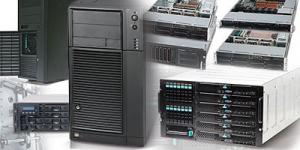 With nearly 20 years of experience and countless servers deployed, rbTechnologies is your best choice for server hardware.  We’re an authorized partner for Intel, Nexlink, Lenovo, and HP servers. We custom build every system we deliver to your specifications and tune it to your needs and budget.

We have all seen the advertisements for cheap server systems out there; they’re in our mailboxes, e-mail Inboxes, and they’re in every magazine you pick up. We get a lot of questions about the servers we sell and why we don’t try to compete with the $699 (or even $299!) “Server” you can purchase online. So here goes…

The servers we sell are designed from the ground up to be a high performance, multi-user system. All of the components of a server are designed around that purpose, from the power supplies and chipset on the motherboard, to the architecture of the internal communication channels of the system, to the RAM, hard disks and other storage media. This means that each user on the network will be able to do their work in a fast, efficient, and effective manner.

Hard disks: We strongly encourage the use of Serial Attached SCSI (SAS) hard drives in the servers we build. SAS hard disks and controllers are built to give maximum performance for multi-user or disk intensive operations: The disk has a controller on-board (unlike SATA, Parallel ATA or IDE disks), and the SCSI controller is designed to minimize system CPU usage when performing disk reads and writes. You can see the performance difference by watching CPU usage on 2 identical systems as they read or write large files to a SAS or SATA disk; the CPU gets very busy on the SATA based system. What does this mean for the end users? Less CPU available to do other tasks, like serve up files and spool print jobs. Modern drives also output less heat (some are filled with liquid helium!) and consume less power. As power consumption in the datacenter becomes more and more front of mind for company executives, server manufacturers are responding in kind by building servers that use less energy and exhaust less heat.

RAM: A “real” server will usually have several features that make the performance of the memory increase dramatically: The most common is ECC, or Error Correction. In a typical PC, if you experience a failure of a chip on your Memory card, you will see things like blue screens, system lockups and general flakiness. In a system with ECC RAM, you will get a polite message that you have bad memory and that it needs replacing. The system will continue to function normally, as the controller for the memory will mark that bit as bad, and simply ignore it until you can replace it.

A “Chipset”, the motherboard of your server, is like your spinal cord. It carries the signals to the CPU, RAM and everywhere else. A PC chipset is designed for one operator, sitting behind the keyboard. A server chipset is designed to handle much more traffic and optimize that traffic so that everyone’s operations get done in a timely manner, without interfering with each other. In addition, Server RAM is designed so that in the event of a failure of a chip, RAM requests from the operating system can be directed around the bad bits, thereby preventing a system failure and enabling the administrator to replace the defective RAM at a time of their choosing.  ECC is somewhat akin to RAID for your RAM.

rbTechnologies carries a full line of desktops and laptop computers including Nexlink and Lenovo. If it’s available, we can likely get it for you!  And our Nexlink desktops come with a standard 5 year warranty.

From lightweight on-the-go netbooks and laptops to desktop replacement portables, to high powered workstations with multiple monitors. rbTechnologies professional staff will build you a system that will fit your workflow and your budget.